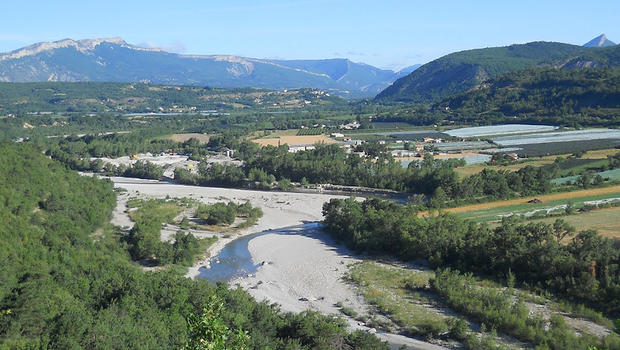 An image from Google Earth shows a general view of the Laragne Monteglin resort in the French Alps. Google Earth

The incident took place at a holiday resort in a small village called Lagrand, about sixteen miles from the town of Sisteron.

French authorities have detained a suspect after a woman and her three daughters were stabbed at an Alps resort by a man who was apparently upset at what they were wearing.

The youngest victim, who was eight years old, is now in a critical condition in hospital after suffering a punctured lung. One of the daughters has been left fighting for her life.

The man is believed to have attacked the three girls outside the family's apartment before entering the building and attacking the mother.

French media says that the man is of Moroccan descent and is 37 years old.

Police are reported as saying the motive behind the attack is "vague" but local media state the attacker had made references to the females being "too lightly dressed". He is also thought to have been in the area on holiday with his family.

According to French broadcaster TF1, the man was not known to the security services or flagged to authorities as a highly risky individual or terror suspect.

Local prosecutor Raphael Balland said: "The motive of the attack is very blurred".

Kim Kardashian West-Taylor Swift Feud Reimagined as LeBron's NBA Finals Block
Taylor Swift has had it with Kim Kardashian and Kanye West's efforts to tarnish her reputation in the media. It's obviously very tongue-in-cheek, either way.
Tuesday, July 19, 2016

NewsAlert:IOC says it will exlpore legal options on Russian ban
There will be no "blanket ban" for Russia's athletes trying to compete at the Olympics in Rio, according to Sky Sources. The IOC will not organize or give patronage to any sports event in Russian Federation , including 2019 European Games.
Tuesday, July 19, 2016