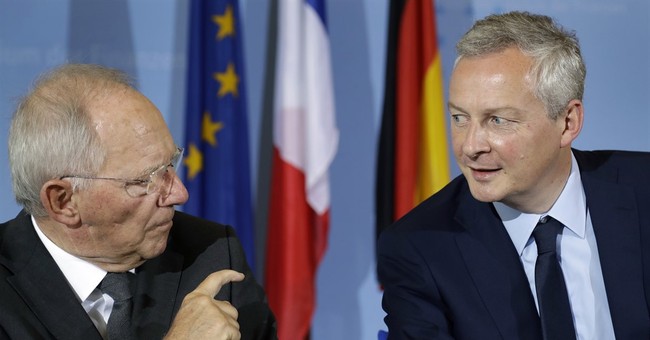 BERLIN (AP)  Germany and France pledged Monday to seek ways to strengthen the 19-nation eurozone, with harmonizing corporate taxes among the possible measures they will mull over in the coming weeks.

The German and French finance ministers say they're confident of an agreement to unlock further aid for Greece, but Germany's Wolfgang Schaeuble is sticking to his insistence that further-reaching debt relief is a matter for the future.

"In general we are so far that we have, in line with what we agreed in May of past year, a political conclusion to create the conditions to pay the second tranche on time", Schaeuble said. "We are determined to get things moving faster and further, in a very concrete way".

"Both are ambitious", he conceded, noting that wider tax harmonization is hard because it would require consensus among European Union leaders. He said investment will also be considered.

"France will respect its European commitment to reduce deficits and we are not doing it to please the European Commission".

In prepared remarks for a speech at the Catholic University of Leuven in Belgium, Schaeuble said he shares many of French President Emmanuel Macron's views on how to strengthen the EU.

With Germany's economy - Europe's largest - outperforming that of France, the traditional Franco-German engine at the heart of the European Union that has often misfired in recent years.

Asked about the United Kingdom's looming departure from the EU, Le Maire said he believed it had the potential "for our financial sectors to become more attractive". "This means jobs, work, and wealth for our countries". "With Brexit, there is this opportunity, and we expect to seize this opportunity". If you would like to discuss another topic, look for a relevant article.

Philippine president Duterte flies to Moscow to meet 'hero' Putin
He had a bilateral meeting with Chinese President Xi Jinping on May 15 and he brought home four agreements. He also said there were the prospects for economic and military cooperation between Moscow and Manila .
Wednesday, May 24, 2017

Contaminated Nacho Cheese Sauce Killed a Man in California
An attorney suing the manufacturer of the cheese told KTXL that two of the people who contracted botulism are teenagers. Most common symptoms of botulism include slurred speech, blurry vision, difficulty in swallowing and muscle weakness.
Wednesday, May 24, 2017

NASA orders up urgent spacewalking repairs at space station
The unit to be replaced is a relay box that's considered as a primary device. "I love being up here", Whitson said in a statement. In second place is Spanish-American astronaut Mike Lopez-Alegria , who has done 10 spacewalks totaling 67 hours and 40 minutes.
Wednesday, May 24, 2017