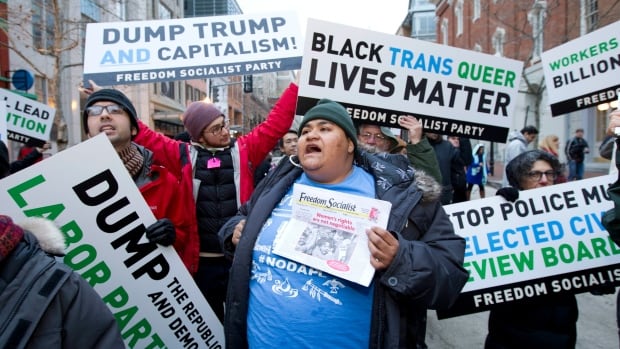 DOJ Pulls Back On Warrant To Anti-Trump Website Host

Federal prosecutors on Tuesday substantially narrowed the scope of a search warrant seeking information related to a website, www.disruptj20.org, that was used to coordinate protests during Donald Trump's inauguration.

The web company hit with the warrant, California-based DreamHost, has resisted the demand, which it said would include more than 1.3 million IP addresses and other information about visitors to disruptj20.org. The sheer amount of personal data covered by the warrant prompted the American Civil Liberties Union (ACLU) to call it a "clear threat" to Constitutional rights, with the rights organization and DreamHost alike raising concerns about First and Fourth Amendment protections.

DreamHost said last week that it is challenging that search warrant in court.

According to the brief, the warrant "was not meant to be used, and will not be used, to 'identify the political dissidents of the current administration, ' Nor will it be used to 'chill free association and the right of free speech afforded by the Constitution'".

But prosecutors say they believe that the site, disruptj20.org, was used for the planning and development of violent protests that accompanied the January 20 inauguration of President Donald Trump.

As a result of Dreamhost's opposition, the DOJ has narrowed down the types of information it's requesting. So now the government is not only shedding this aspect of its request; it also claims it will set aside and seal any information DreamHost hands over that is outside the scope of its warrant.

It particular, DreamHost noted publicly that it had 1.3 million IP addresses of visitors, emails associated with people who used the site for legal advice, membership lists, draft blog posts and several thousand images, some published and some not.

"The website was not just a means to publicly disseminate information (as many websites are created to do), but was also used to coordinate and to privately communicate among a focused group of people whose intent included planned violence", the reply, which was sent to reporters on Tuesday, states.

The government's warrant has been revised to specifically exclude the site's visitor logs. "The government is focused on the use of the Website to organize, to plan, and to effect a criminal act - that is, a riot".

"DreamHost, like many online service providers, is approached by law enforcement regularly to provide information about customers who may be the subject of criminal investigations". "Intrusion into the privacy of so many individuals who viewed the anti-Trump protest site anonymously should not be enforced without a highly exacting showing of the government's need for that information". Despite its new limits, the warrant is still looking for info about political protests, and it seems the DoJ and DreamHost don't see eye-to-eye on the Constitutionality of that search.

Taylor Swift announces new album 'Reputation' on Instagram
The cover art features a black and white photo of the singer with newspaper headlines reading " Taylor Swift " in the background. We're pretty sure Beyonce still holds the most-liked overall record with more than 10 million for her twin newborns .
Thursday, August 24, 2017

Chelsea Clinton defends fellow first kid Barron Trump
She also replied to someone who shared the piece, "No child should be talked about in the below manner - in real life or online". Earlier this year, Clinton defended Barron after he was the target of a joke by a " Saturday Night Live " writer.
Thursday, August 24, 2017

England rout West Indies inside three days
The first test match of the 2012 summer saw the West Indies arrive at Lords and Stuart Broad on one of his magic spells. By then, the Windies had managed just 200 runs for the loss of 13 wickets in the day.
Wednesday, August 23, 2017