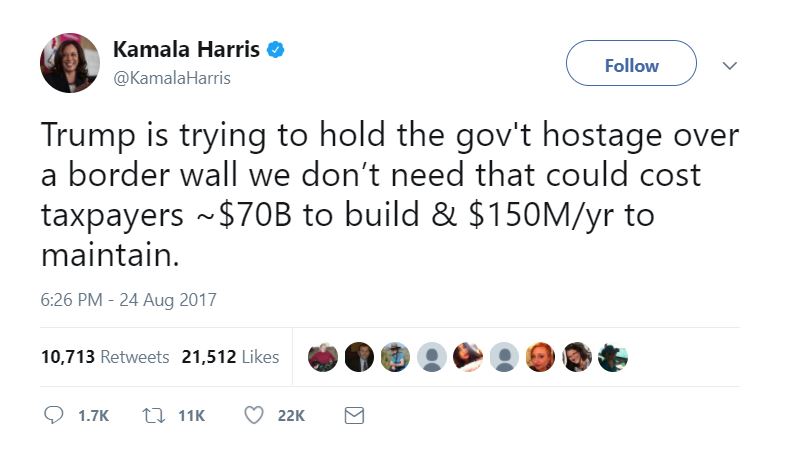 The trade agreement was signed by former President Bill Clinton, the husband of Trump's political rival Hillary Clinton, who he beat in the November presidential election previous year.

On the morning of Sunday August 27 Trump tweeted out that with NAFTA being "the worst trade deal ever made", his administration "may have to terminate".

Mexico's negotiating position will continue to be "serious and constructive" and the country's negotiators will not hash out differences "via social media or the press", the foreign ministry's statement said. The parties involved pledged to adopt quick procedures to update the agreement.

Mexico is refusing to negotiate with President Trump by Twitter - and by the way, the country still says it won't pay for the wall.

During his election campaign, Trump insisted Mexico would pay for the construction of the wall, which experts said could cost about $22 billion and take more than three years to complete. A May poll from Fox News found that only 36% of Americans think the wall will be built and only 25% believe Mexico will pay for it.

The response to President Trump's tweet is nearly universally negative.

The Mexican Foreign Ministry issued a statement Sunday in response to Trump's tweets.

In its news release on August 27, Mexico City reiterated that it has no intention of financing Trump's proposed wall across the nearly 2,000-mile-long boundary between Mexico and the U.S. He also suggested he would follow through on previous threats to pull the US out of the trade pact he called the "worst deal ever made".

The Mexican government expressed its "full solidarity" with the people and government of the U.S. and said it had "offered to provide help and cooperation" in the wake of Hurricane Harvey.

Today, as the current spending extension bill nears its end, it remains unclear if Trump and Congress can once again agree on a measure that doesn't cover the 1,954-mile wall's expenses. "Both being very hard, may have to terminate?" the President wrote in his Tweet. "We'll be able to stop them once the wall is up", he added.

Houston flood: Veteran police officer dies in flood waters
The search team determined his probable path and narrowed down his last location to the Hardy Toll Road in Houston , Acevedo said. Sergeant Steve Perez who worked in traffic enforcement drowned in Houston while driving through an underpass during the floods.
Wednesday, August 30, 2017

Pictures of Rescued Pets: How They're Coping with Harvey
As such, the shelter expects the repercussions of the hurricane to last weeks, if not months. Head to our news partners at ABC13.com for other suggestions .
Wednesday, August 30, 2017