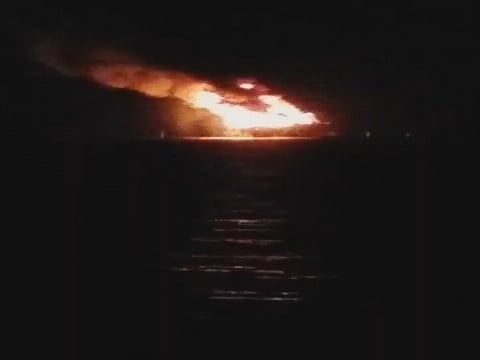 No fatalities were reported as of 8 p.m., but Kenner Police officials say numerous injuries were serious.

The New Orleans Advocate reported that five crew members are in critical condition from blast and burn injuries. No deaths have been reported.

A spokesman for the St. Charles Parish posted to Facebook that the Emergency Operations Center is aware of the fire and is responding to the incident.

Residents said they heard an explosion from several miles away and the Coast Guard is on the scene.

The platform, which is a storage and transfer structure for oil wells on the lake, was still burning, Jefferson Parish Sheriff Joe Lopinto said at a press conference late Sunday.

Officials said there could be oil spilling as a result of the explosion.

"Several people have been rescued from the active fire on the rig", Harris said.

Authorities acknowledged there was a possibility that the fire meant oil could be leaking into the lake, but noted that Jefferson Parish drinking water will remain safe because it is pulled from the Mississippi River.

Jefferson Parish officials say there were cleaning chemicals aboard the platform but do not know the exact cause of the fire at this time.

Social media users reported hearing a loud noise on Sunday evening that even rattled some homes.

AirAsia flight forced to turn around after terrifying mid-air emergency
It is the latest incident for AirAsia which was hit by another drama on a Perth flight earlier this year. The budget Indonesian airline said in a statement engineers were examining the plane at Perth.
Monday, October 16, 2017

'Kellywise the clown' terrifies Anderson Cooper in 'It' parody on SNL
McKinnon's Goldry later talked about "a secret code" actresses used "to warn each other about creeps". She was played as a fame-hungry liar in a brilliant Chicago-themed January sketch.
Monday, October 16, 2017

Jets can't overcome Patriots, controversial call
On the ground, Dion Lewis rushed for 53 yards in seven carries while Mike Gillislee added 52 yards in 12 attempts. Brady has 1,702 yards and 11 touchdowns against a lone interception to complement his 112.0 rating on the season.
Monday, October 16, 2017