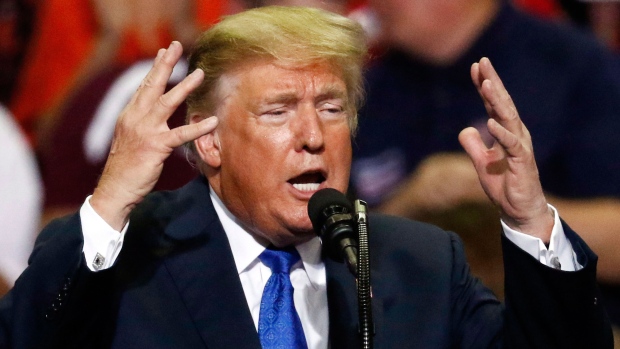 President Donald Trump gestures as he speaks at a rally Tuesday Oct. 2 2018 in Southaven Miss

Just hours before the vote over Supreme Court nominee Brett Kavanaugh, President Donald Trump tweeted his support for the embattled judge and repeated his belief that the judge's protesters are 'paid professionals'.

Shortly before Friday's Senate procedural vote to go forward with Kavanaugh's vote, Trump tweeted about viral videos of female sexual assault survivors who had approached senators in an effort to explain their point of view for why Kavanaugh's Supreme Court nomination should not go forward. He also claimed the signs, which look professionally made, were identical - therefore paid by Soros. Paid for by Soros and others. "These are not signs made in the basement from love!" the president tweeted. A second allegation came from a woman named Deborah Ramirez who accused Kavanaugh of exposing himself at a dorm party during his freshmen year at Yale.

Swetnick claimed Kavanaugh was involved in a series of "gang rapes" when he was in high school, but she offered no additional evidence or witnesses to support her allegations.

Saturday's vote will be the culmination of the divisive events of Kavanaugh's nomination.

Almost 300 protesters were arrested at a US Senate building on Thursday afternoon as crowds of activists descended on Capitol Hill while lawmakers reviewed the FBI's report on the allegations against Supreme Court nominee Brett Kavanaugh. Jeff Flake in the elevator last week - calling them paid professionals.

"Trump also called the sexual assault survivors "#Troublemakers". The incident was partially credited for Flake's decision to request an additional FBI investigation into the accusations against the nominee, delaying the final confirmation vote.

Hatch waved and told them to "grow up" as he entered an elevator.

UK's May aims to gain Conservative control after storm Boris
So, it is no surprise that we have had a range of different views expressed this week. "Our future is in our hands". But she refused to rule it out, adding: 'The resilience and ingenuity of the British people would see us through'.
Sunday, October 07, 2018