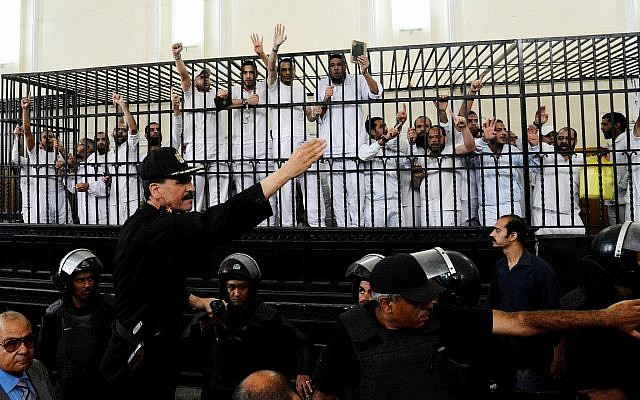 The Brotherhood, a almost century-old Islamist movement born in Egypt with pockets of support across the Arab world, was designated a terrorist organisation by Cairo after the military in 2013 ousted Mohamed Morsi, a democratically elected president with roots in the movement.

President Donald Trump speaks as he welcomes members of the Baylor women's basketball team, who are the 2019 NCAA Division I Women's Basketball National Champions, to the Oval Office of the White House in Washington, Monday, April 29, 2019.

Egyptian President Abdel Fattah al-Sisi asked Trump to make the designation, which Egypt has already done, in a private meeting during a visit to Washington on April 9, a senior US official said, confirming a report in the New York Times on Tuesday.

Sisi, who ousted President Mohamed Mursi of the Muslim Brotherhood in 2013 and was elected president the following year, has overseen a crackdown on Islamists as well as liberal opposition in Egypt.

The Egyptian government blamed the Muslim Brotherhood for a 2013 suicide bomb attack on a police station that killed 16 people. Secretary of State Mike Pompeo and national security advisor John Bolton support the move, while others at the Pentagon are opposed and are working to propose a more moderate action.

It was not clear if the administration was considering blacklisting only the Egyptian branch as a foreign terrorist organization (FTO) or all regional offshoots of what analysts say is a heterogeneous group with no central authority.

Another concern is the impact such a designation would have on the rest of the Middle East.

The Muslim Brotherhood has emerged in recent years as a favourite bugbear for the United States far-right, with numerous social media users on Tuesday hailing Trump's push by sharing unfounded conspiracy theories that the group had infiltrated former president Barack Obama's administration or was attempting to impose Islamic sharia law in the US. The organization has close ties with President Recep Tayyip Erdogan's ruling AK Party, and many of its members fled to Turkey after the group's activities were banned in Egypt. Morsi was a former leader in the Muslim Brotherhood. Numerous group's members fled to Turkey after the Brotherhood was banned in Egypt. Turkey remains a North Atlantic Treaty Organisation ally.

In a recent statement, Sarah Sanders, the White House press secretary, acknowledged that the administration was working on designating the Muslim Brotherhood as terrorists.

What's on Google's plate after Pixel sales dip in Q1
Google CEO Sundar Pichai was "hammered" during a different part of the call about the company's poor Pixel performance. This will most likely be the Nest Hub Max and the Google Nest Hub along side the mid-range Pixel 3a and Pixel 3a XL .
Wednesday, May 01, 2019