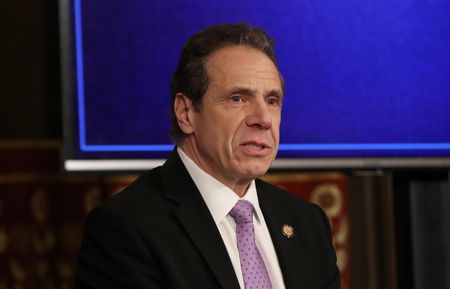 The number of infections is now doubling every three days in NY and the worst of the outbreak, known as the apex, could arrive in 14 to 21 days, putting huge pressure on health services, Cuomo said.

New York City, home to more than 8 million people, had 157 deaths and some 15,000 cases of Covid-19, almost one-third the United States total yesterday, despite imposing strict limits on travel, socializing and work.

It comes after a spokeswoman for the World Health Organization (WHO) said the United States could soon see a surge akin to those experienced across Europe. In New York, bars, restaurants, clubs and gyms have shuttered, Broadway marquees productions have gone dark, airports have emptied out and streets normally filled with activity have largely become ghost towns.

President Donald Trump insisted Tuesday that he wants the U.S. lockdown relaxed by mid-April, warning that keeping the measures in place could "destroy" the country. At least 543 people in the U.S. have died.

But many public health experts have warned that lifting the measures too soon could lead to a surge in cases and hospitals being overwhelmed, amid a dire shortage of ventilators and protective gear for health care workers.

Speaking later in the day, the vice-president, Mike Pence, said the Federal Emergency Management Agency (Fema) had sent NY 2,000 ventilators and plans to send 2,000 more on Wednesday. "No American is going to say accelerate the economy at the cost of human life", Cuomo said at a Manhattan convention centre that was being converted into a 1,000-bed temporary hospital.

Chuck Schumer, D-N.Y., have widely different views on the federal bailout package approved by Congress. Cuomo said the measure would not give NY enough money to make up for the widening multibillion-dollar budget gap.

The act allows the federal government to order businesses to manufacture needed goods and Cuomo has repeatedly called for Trump to use the law more aggressively.

So far, the governor said, NY has not flattened the curve - the metric many officials are following as they attempt to keep the contagious respiratory virus from overwhelming public health systems.

He said the state was exploring a scheme where one ventilator could be used on multiple patients, noting that Italy was forced into a similar situation. It needs tens of thousands more.

Andrew Cuomo toured the 1.8-million-square-foot facility yesterday, and made the announcement at a press conference on site. "Not to exercise that power is inexplicable to me". He said the state already had 4,000 in its hospitals.

"And then to hear the President talk about how we're going to be scaling back restrictions at a time when we have exponential spread of this disease.it actually sends a confusing message". "You're missing the magnitude of the problem". On Monday, New York confirmed that it had over 20,000 cases of the novel coronavirus.

NY is far and away the hardest-hit US state in the coronavirus outbreak. "It's just a matter of time - we're just getting there first".

Cages of ventilators, part of a shipment of 400, arrived Tuesday at the New York City Emergency Management Warehouse.

O'Donnell noted that Dr Anthony Fauci, the leading immunologist who has been a member of the federal coronavirus task force, and has often been at Trump's side during his coronavirus briefings, was not present for this one.

De Blasio said he'd looked at some cases of people who have been convicted of sexual assault or domestic battery and decided that he does not want them to be let out.

He went out of the way to praise Jared Kushner, who "knows NY and is working in the White House and he's been extraordinarily helpful on all of these situations".

Coronavirus patients are not the only ones who would be impacted by a breakdown in the hospital system. "Not just for folks with coronavirus - that's for all the other health care challenges".

"We are not slowing it".

The warnings appear to have gotten the administration's attention.

After days of speculation, Automotive News today reported that Ford will partner with General Electric (GE) Healthcare and 3M to make ventilators, respirators, and face shields.

"We were looking at a freight train". "And God forbid we say, 'We could have saved them if we had the right equipment.' That's what keeps me up at night".

"We are looking at a revenue shortfall of nine, 10, 15 billion dollars".

The Rams revealed their new logos, and Twitter's apathy was palpable
In the actual logo, the ram's horn looks less like a bolt and much more like an ocean wave, which is what its designers planned. Louis back to Los Angeles in 2015, they only changed the logo slightly while also slightly altering the color scheme.
Thursday, March 26, 2020

More details about "virtual" NFL Draft leaked
All NFL facilities will soon be closed to personnel - with some limited exceptions - in response to the coronavirus pandemic . The draft is still expected to be televised. "The challenges we face are not unique", Goodell said in the letter.
Thursday, March 26, 2020